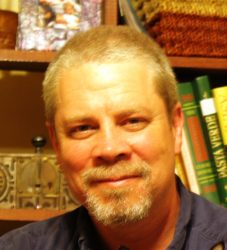 Passions:  Friends; biking through the countryside west of Harrisonburg; hiking High Knob with my wife Cindy (who teaches social work at JMU) and kids Heather, Alex and Ana; advocacy to improve the situation of immigrants and persons with mental illnesses; cultural diversity activities like the Court Square Theater Latino Film Fest; reading SciFi; cooking for others; making new things, whether it’s a table in my kitchen or a Friendly City Food Coop (where I served on the founding team). Heather does community organizing with Renew Rocktown to create greater local climate resilience and she work with The Natural Garden; Alex is currently roaming Mexico and Central America and generally is involved in solidarity work with indigenous groups from Mexico to Canada; Ana is studying social work at EMU.

Story: I grew up mostly in Tallahassee Florida and studied music composition, horn, and piano at Florida State University. Later I spent 10 years in Washington DC working in hunger advocacy, shelters, and low-income service organizations. Before coming to Harrisonburg in 2001, my family spent 5 years in El Salvador with the Mennonite Central Committee. In Harrisonburg, I’ve worked in the school system, mental health services, and NewBridges Immigrant Resource Center. My brother’s journey with schizophrenia greatly impacted my life. I brought together that interest with my international experience to help create family education and support programs in El Salvador since 2002. That volunteer work merged with my growing interest in research to push me to obtain my PhD in Nonprofit and Community Leadership from JMU’s School for Strategic Leadership Studies in 2016.

Our Community Place is an exciting opportunity for me to lead an organization dedicated to helping those in great need in our community, to work with a fantastic team of staff and board and volunteers, and to help move the organization to the next step in its important development. I want to thank all those who have come before and built OCP into what it is today. 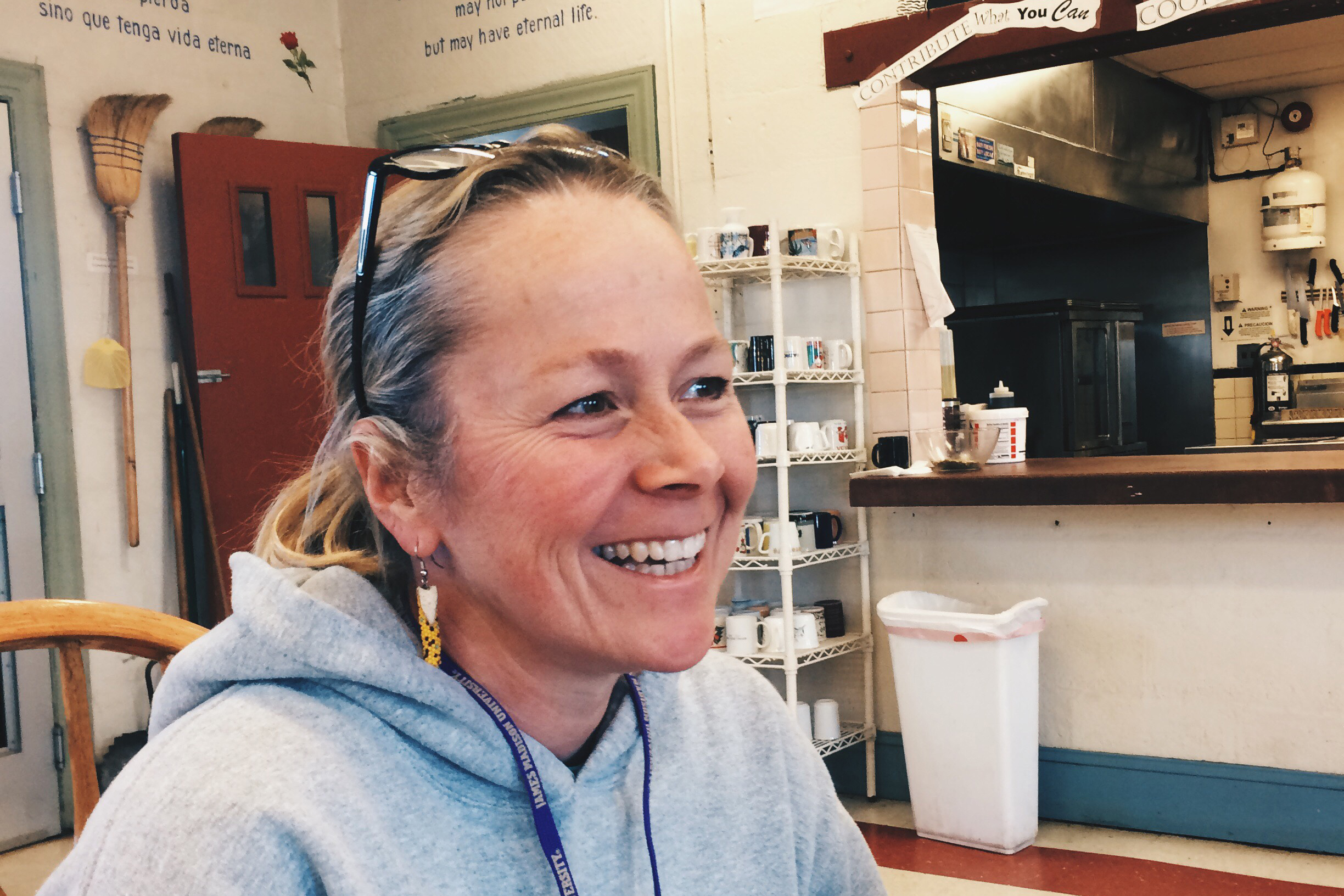 Things I Love: I love spending time with my family. I am married and have one son and a new daughter in law! I love the ocean, reading, movies (especially action and westerns), hockey (Boston Bruins), music, knitting and crocheting, and hiking.

Story: I am a native of Rockingham County and I have lived here my whole life. Through the years I have had many types of jobs, and the longest was managing several retail stores. I have been searching most of my life for God’s purpose for me and where that will lead. In February of 2015, He led me to OCP and I am grateful for the opportunity to serve as Volunteer and Community Care Coordinator. When I’m not at OCP I am usually spending time with my family, riding motorcycles with my husband, and spending as much time out of doors as possible. 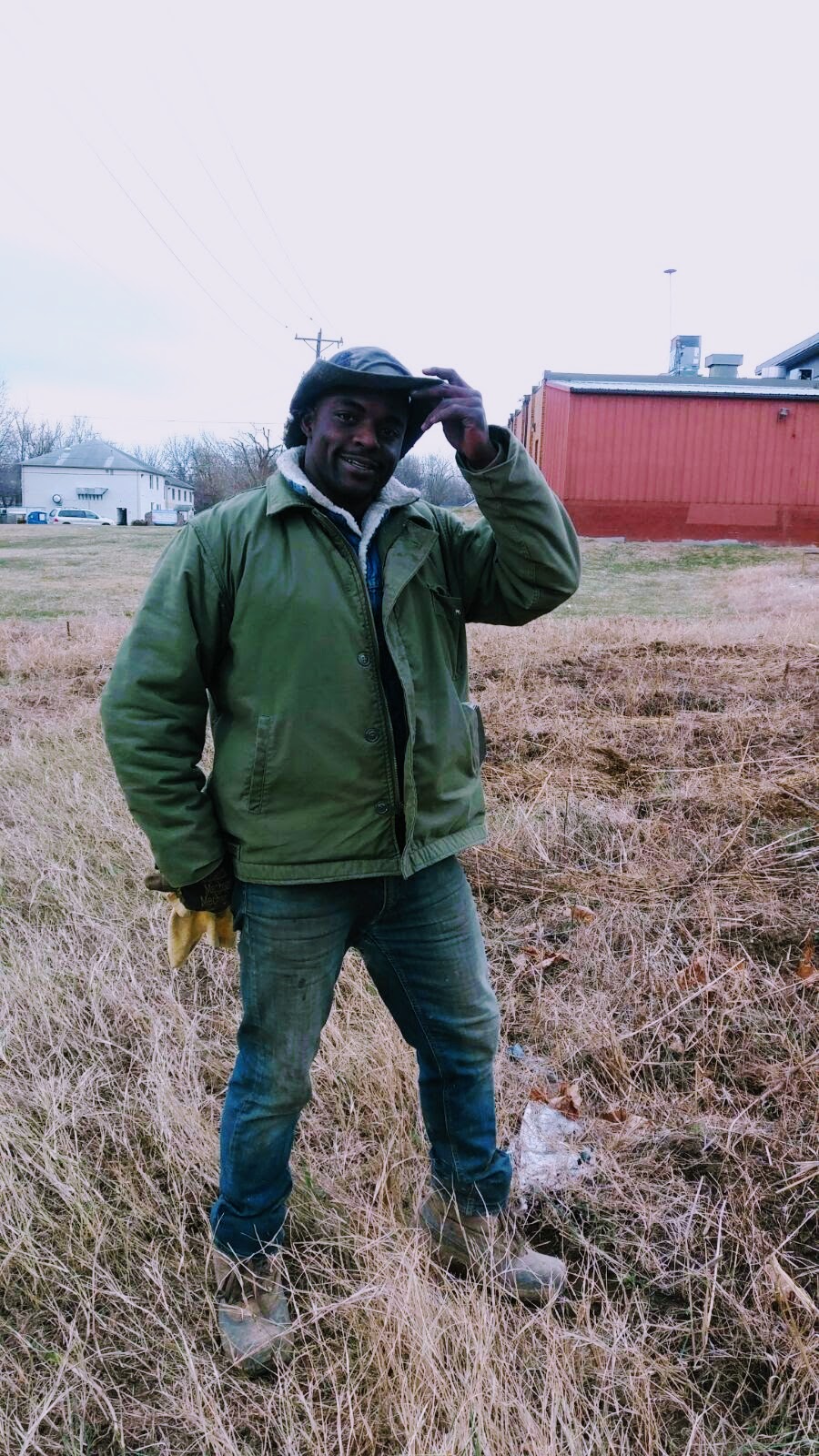 Things I love: I love my family who have always been there for me when I was going thought rough times in my life. I love farming and the concept of developing the next rural and urban community small farmers.  I love serving my community, and enjoy being a support for those who are being socially, financially and environmental crippled. I love laughing, and creating environments where anybody can feel safe to express their personality without fear of being judged. I love outdoor activities such as running, soccer, American football, hiking, fishing, kayaking, camping, and anything else that involves getting close nature. I love seeing young people in our community getting active because it gives me the hope for a better future.

My Story: I was born in 1989 in the Democratic Republic of the Congo in the capital, Kinshasa, in a time when Zaire (as it was known then) started cutting ties with Belgium, causing increasing deterioration of our economy. Most of my childhood was spent in Goma, a small town in the Eastern part of the country in the region of North Kivu. I was forced to mature before my time due to the traumatic experiences that one born in the Democratic Republic of the Congo had to go through before reaching fifteen years of age.  After the Rwanda genocide in 1994, the region of North Kivu, especially the town of Goma, welcomed all the refugees who ran away from Rwanda and came to the Congo in search for safety and a better lifestyle. In May of 1997, my older brother and I experienced the Rebels taking over the capital of Kinshassa where Mobutu was forced to exile in Morocco. Laurent Kabila became president and that’s when our name changed from ZAÏRE to The Democratic Republic Of The Congo.

The 2002 eruption of the Nyiragongo volcano was the world’s most dramatic example of a lava flow through a major town according to the BBC, and my mother and five brothers were there. In 2004, we left the town of Goma to join our father here in America. I graduated from Gar-Field high school in Prince William County in Northern Virginia in 2008. In 2013, I received a Bachelor of Science in Economics with a minor in Business from Shepherd University. Words cannot describe the devotion that those professors showed as they worked with me to understand this challenging field, especially with my language barriers. In 2016, after farming for a year and learning the conventional methods of agriculture I graduated from West Virginia University Davis College of Agriculture and Natural Resource and Design with a focus in community development. I look forward for the plans God has for me at Our Community Place and for the City of Harrisonburg, VA. 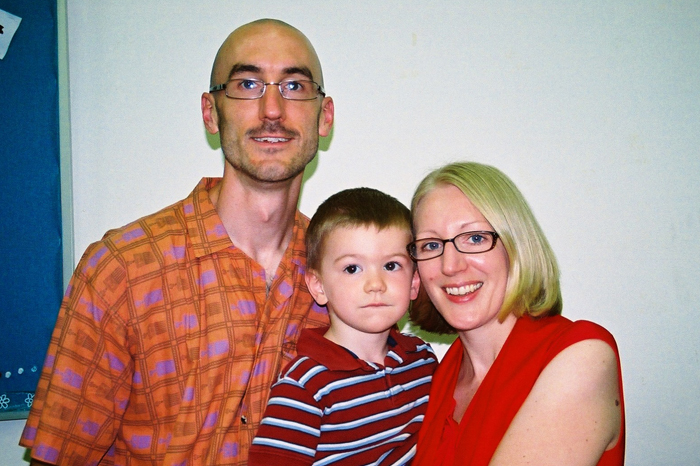 Story: I am a native of Vermont and a graduate of Williams College (2002) and Duke Divinity School (2008). My wife, Dayna, works at Menno Media, and we have two children, Ethan, who was born and died in August of 2009, and Noah, who was born in February of 2011. I believe my journey towards OCP began in Springfield, MA, where I joined a community of Jesus-followers whose presence in the city brought us into deep relationships with marginalized people, including and especially the homeless. During my time there God opened my eyes to see the Gospel as more than just personal transformation, but as the birth and unfolding of a new kingdom of peace and justice birthed from the abandoned places of our society. My family and I continued to live and work in marginalized communities in Durham, NC, where I attended Duke Divinity School from 2005-2008. From my graduation until our move to Harrisonburg I served as Internship and Mentor Coordinator for Year of Opportunity for Durham Teens, an organization that provided job training and mentoring for at-risk youth. 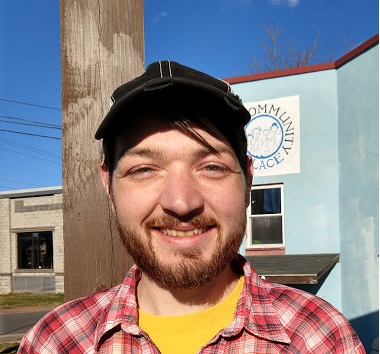 Things I Love: Food, Food, and more Food, gardening, 4H, board games, teaching others how to cook

Story: Native to West Virginia, I grew up in a small town with my parents and sibling. Son to an Extension Agent and Land Surveyor, a lot of my time was spent in the woods, on the farm, and being very active in 4H at both local and state levels. At fifteen I got my first job in a restaurant and had an amazing mentor that started me on the path of becoming a culinarian.
I moved to Harrisonburg in 2005 and graduated with a degree in Media Arts & Design at James Madison University. There I was active in the Fencing Club, acting as club’s armorer, as well as WXJM, where a friend and I hosted a weekly talk show.
After college I found myself back in the restaurant industry providing food for JMU Students via Aramark and later assisting with the opening of a new downtown restaurant – Ruby’s Arcade.
I am very excited and blessed to be welcomed into the OCP team and look forward to servicing the community in new and engaging ways. 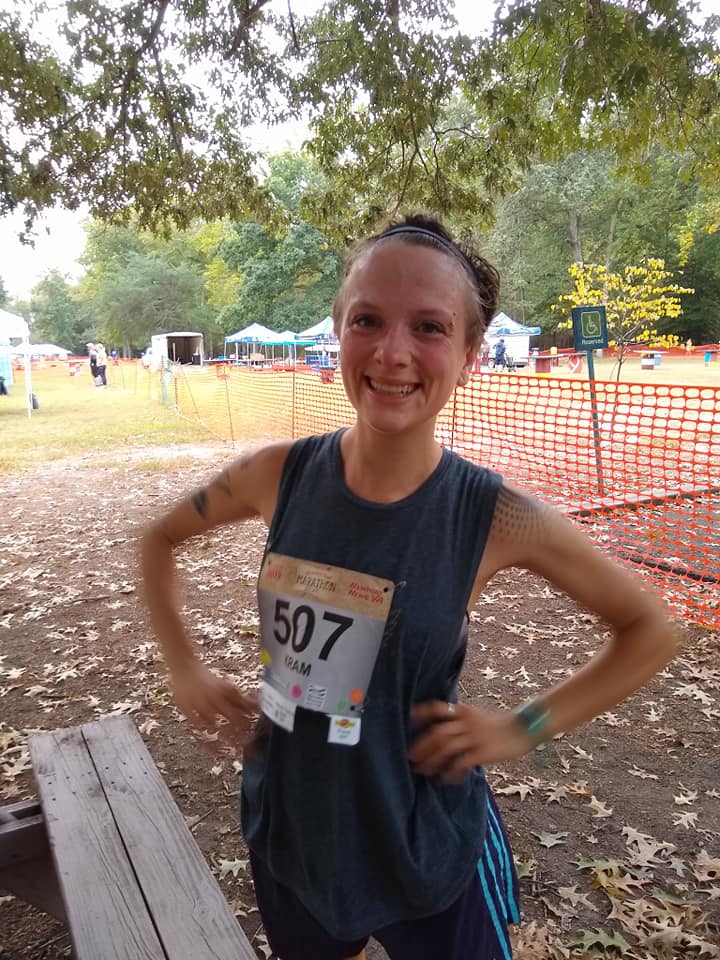 I grew up traveling around the US and the world, and no place has felt more like home than Harrisonburg. Currently I’m studying social work at Eastern Mennonite University.

With my free time you can find me digging in the dirt and chasing Muscovy ducks around Hinton. I love to hike, cook, and spend as much time outside as possible.

Food, fire, good music and friends are my definition of heaven. One day when I grow up I hope to bike across the US and build a strawbale and cob biochar manufacturing village. 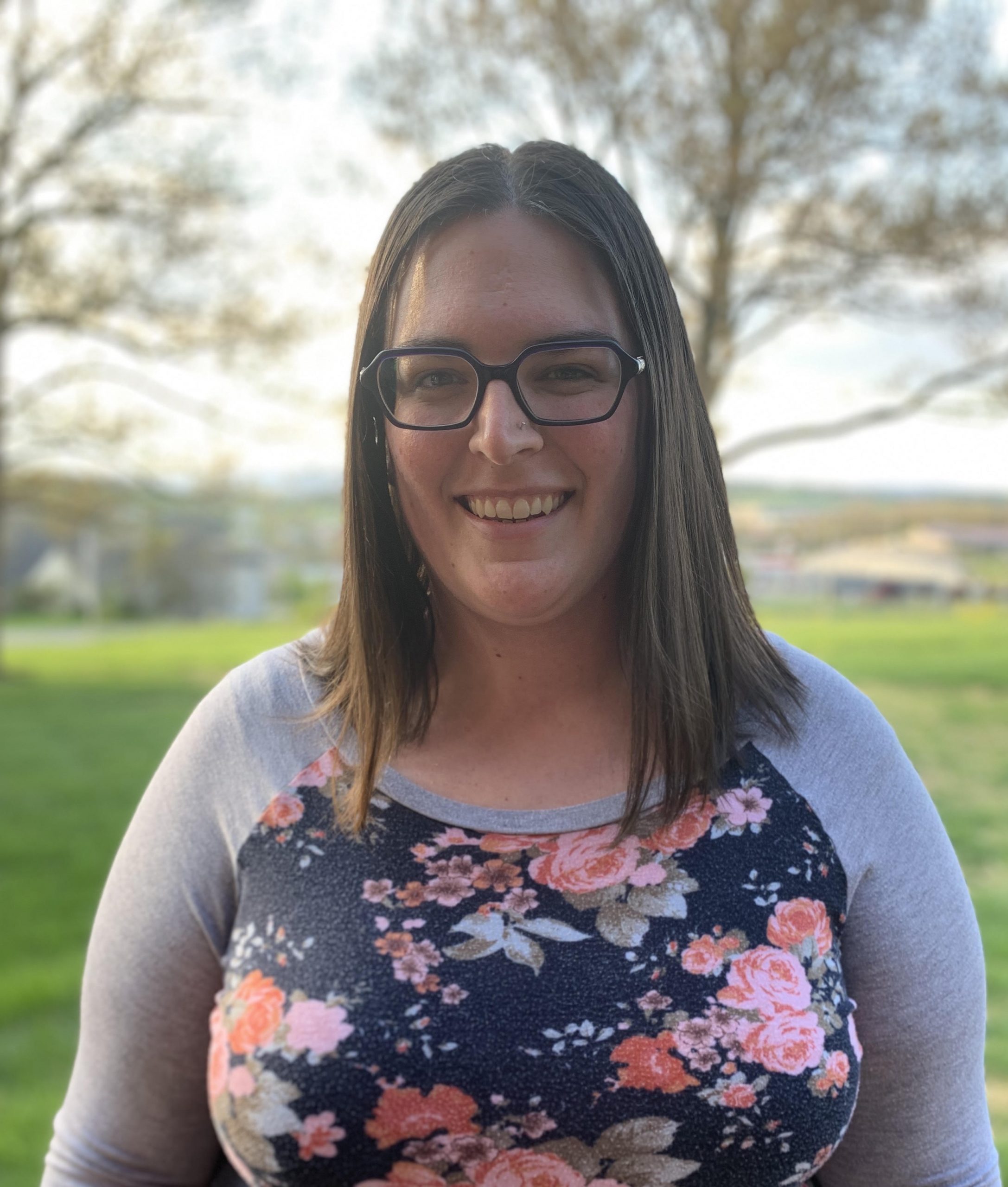 Things I like: spending time with my friends and family as much as possible. Eating is my number one hobby, so restaurants are my jam! My husband and I enjoy binge watching tv shows on Netflix and Hulu a little too much.
My Story: I was born and raised in Rockingham County. I have lived in the Harrisonburg area most of my life. In 2005 Hurricane Katrina hit the Gulf Coast and I travelled with a group from my church to volunteer my time to clean up and fix damaged houses. It was during this time (a Sophomore in high school) that I felt my calling as a Social Worker come to light.
I attended Eastern Mennonite University for my Undergraduate degree and graduated in 2014 with a Bachelor’s in Social Work. Since then I have spent my time mostly working with children and adolescents from difficult backgrounds. For the last 5 years I’ve worked with students in the school-setting providing intensive in-school behavioral therapy.
With all of this experience and knowledge I have gained I am excited and grateful to have the opportunity to work with another vulnerable population in our community. I look forward to using my support and advocacy skills in this new position. 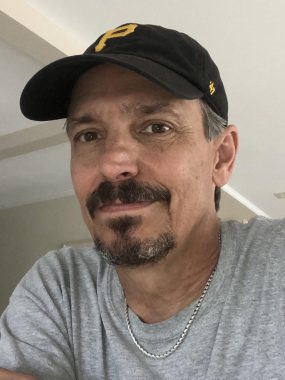 Tim Cummings is a native of Richmond who moved to Harrisonburg in 1979 to attend JMU. Tim began his own import business in 1988, specializing in handcrafts from Latin America. He has been a self-employed sole proprietor ever since, but came to work at OCP in the spring of 2020, when the Covid-19 pandemic forced his business into dormancy. Tim began as a volunteer, but was hired to focus on assisting our homeless community members in finding permanent housing. His 20 years’ experience as a landlord has been useful in helping negotiate with landlords in the local housing market. Tim is married to Tricia, a registered nurse who now teaches nursing and medical topics at Harrisonburg High School. They have 3 adult daughters and 2 precious grandchildren. Tim enjoys skiing, biking, and carving amazing pumpkins for Halloween.