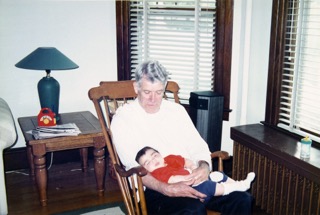 The day misspent, the love misplaced, has inside it the seed of redemption. Nothing is exempt from resurrection.

To be human is to embrace memory, or to grasp recollection the way a child squeezes a rubber ball in his tiny, clenched fist. Memory. It’s cornerstone, isn’t it? Bedrock, owned. Coveted. (I remember that!) Each of us holds sacred, an intimate collection of events, narratives, imagery, captured and archived, stilled against time.

It’s a gift, for the most part. Yet, memory is reconvened, too, through the trauma and pain of yesterday. And so, to be human is to ache, again and again, over the revival of past misdeeds, or a manufactured guilt. And to replay distant narratives that no longer define the person who exists in the present moment.

I’ve thought a lot about memory, and how it lives and breathes inside of us. I’ve thought a lot about my father, too, and how memory binds me to him still, more than a decade after his death. Wally was my hero, but a pigheaded Irishman just the same, my mother would often remind me. Why, your father, he’s tougher than a boiled owl, she would say, in an effort to diminish the angst I felt around his tender heart.

Now, Wally’s spirit comes back to me each time I visit OCP, a place I have come to know since my son, Devan, volunteered here during the summer of 2014. A serendipitous encounter? A little dance with fate? No doubt, my introduction to OCP shoved me, straight on, into the face of redemption. And here was a concept that I had studied, scholar-like, for years, an idea that I desperately needed to understand for Wally’s sake, and for my own. And yet, I was left cold by its meaning.

For years, I wore Wally’s shame like a fitted shirt. In life, he had witnessed three traumatic deaths, each one more horrific than the last. In 1940, a damp, cold fever upended his sister, Trudy, when she was only 14; a head on collision, with Wally at the wheel, shattered his first wife, Kathleen, circa 1950; and then, an accidental drowning in 1962 took the life of a young man he had been working with on a remote Adirondack lake. Each life ended within an arm’s length of Wally’s grasp. And with each loss, the low hum of death whistled in his ear, and stayed just a little too long.

I know that shame and grief are twins: They close in on us when death and separation are near. And it’s human compunction to assign blame to one self. It’s the way we were made, my mother would have said.

She was right, of course. Once, we were each born whole; small, complete reflections of light. But, we are destined to relinquish ourselves, little by little, over time.   We need strength to re-form and come back to who we were, what we are meant to be. At OCP, I have met people, who, like Wally, have been rubbed raw by life. And whose memories have been triangulated by agony, remorse, and shame. And yet, they have taught me that here, we are all trending toward redemption.

It’s what I couldn’t learn from books, or from the design of human reason.

We can’t redact ourselves from sorrow, or step off the wheel of human connection. Redemption is the pulse and thrum of forward motion, the collective breath we take each day. What I have learned at OCP is that redemption is finding, through each other, what we have always had; once; then.

If I could cut Wally out of yesterday, for an hour or a day, I would take him to OCP. We would amble in, slowly, he on crippled legs and I, with an arm loose around his side. He’d feel the sound and chaos of human understanding. We would sit together again. We would sit for quite a while.

And, I would say, I love you, Wally, if I had the chance to form the words again.