Keeper of Faith (Or, God Doesn’t Care if You Wear Birkenstocks) 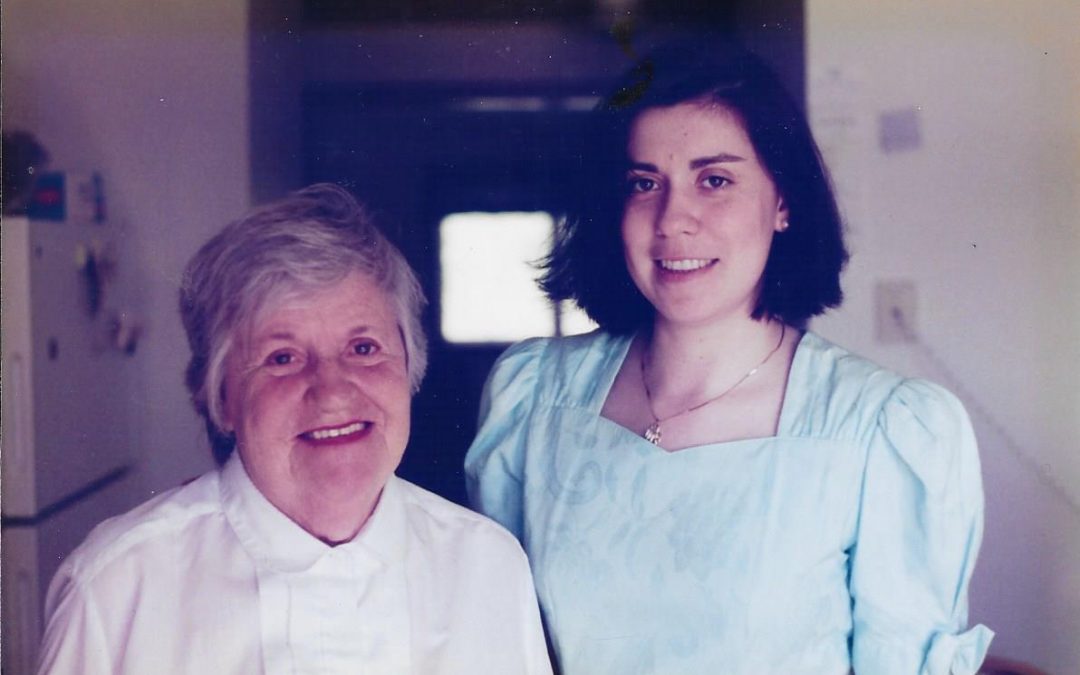 Keeper of Faith (Or, God Doesn’t Care if You Wear Birkenstocks)

“Go where your best prayers take you.” ―Frederick Buechner

“Go where your best prayers take you.”

My mother’s name was Evelyn, and she was a storyteller, an artful historian with a gift for gab. Her memory my companion, still, is the fabric that shaped her voice, and mine. Evelyn, my mother, mom, ma, mommy, and, nanny, in the end, was a diligent survivor, elegant and stoic, a staunch Catholic with indivisible faith.

It was her faith that made us strong. And yet, I was weak. I knew by the time I was twelve that mine was a feeble version of her own relentless devotion. I struggled to be like her, and studied her religiosity. Sunday Mass was an opportunity to realign myself with the subtle display of her faith. Was it the way she genuflected, one knee prostrate, the other bent, as she tilted her head and spoke softly to God? Or the way that her right hand, reflecting Divine love, blessed herself, lingering thoughtfully at each point…In the name of the Father…and the Son…and the Holy Ghost…

Perhaps it was the way she sang the Ave Maria, in a beautiful voice she said was inherited from her father’s side of the family that revealed the mechanism of her faith? As her eyes, moist with memory, fixed upon the crucifix above, I would steal a glance her way, hoping she wouldn’t notice. I studied the determined angle of her jaw, the set of her chin when she rose her voice to God, the gentle slope beneath her brow. Had I finally found the seat of her faith?

Many years later, I still tussle with the meaning of faith, but have accepted that I share my father’s version. It was Irish fate, Evelyn would say, to roil emotion and belief, to cast a suspicious glance God’s way when tragedy strikes. Why, look at your father, for heaven’s sake! Typical Irish man! They wail and carry on, wringing their hands and blatting…The Irish, why they just can’t get over things! And then, they blame God in the end.

She was right in many ways, and she knew all along that I was my father’s daughter. It must have broken her heart, once.

Then, one night she came to me. Her hands, eloquent speakers, and now, they tumbled toward me, four fingers still bent, as they were in life. Her steady voice was thrumming, thrumming, a distillation of memory in fingertips. The same steadfast voice I heard in girlhood. She whispered her forgiveness. Thrum. Thrum. She said she told me then. Thrum. Thrum. A malformation of words, a sway in diction? A slight of the ear, again.

In the end, though, didn’t I see that it was gentle nanny, my mother, Ma, mom, mommy, who angled my faith a different way? Throughout her life, she foretold the stories of our ancestors. Grandpa Strohmeyer, brave and soft-spoken, lost two sons in his own time. And Aunt Edie, well, she was a reformed Southern Baptist. Mom’s own father died, not as a Catholic, a month before the birth of his fifth child.  Life with mother was a sojourn, a journey back to those who came before us, and recollection of how they took shape in my life.

It’s not one thing, is it that defines the will to believe?  Many years after nanny died, I encountered, again, the delicacy of faith.  It was my first of many visits to Our Community Place. Here, I met characters I knew once: OCP was the theatre of my own history, playing out again. Now, I danced with gentle stoics, strong, or infirm; hand-wringers and agitators; each cloaked in the vestments of their hidden faith. And yet, they were all believers. I knew because they were here. I knew because they found me; and I was amongst them again.

At OCP, we are all choreographers of our own faith. It’s what my mother might have said – that faith sits somewhere near the telling; and the hush between the words.

A few hours before she died, I laid down next to her, and wound my fingers around her feeble hand. She was a fragile nanny now, her curled frame withered by time and chemotherapy. Her conscious mind had slipped away. `

Now, a delicate tremble, a slight movement of her divine hand, the same hand she crossed herself with so many times?

I stole back to memory, back to the place where it all began.